And so on and so on: seven non-synthesized quotes, conjectures and questions prompted by Sarah Pierce’s ‘Towards a Newer Laocoön’. 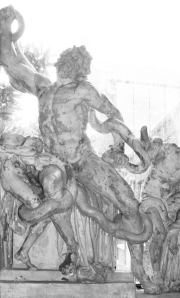 1.
“Whenever this account appears to be in a fluid state in which differences in and adjustments to level play a part, we ask the reader’s indulgence, since there will always be stoppages, blockages, siltings, unsuccessful attempts at conduction, and sources ‘that can never come together’, not to mention subterranean streams, and so on, and so on.”[1]

2.
A trio of associatively segue-ing terms often seems suited to Sarah Pierce’s art — or at least to recurrent streams within it. Appropriation, approximation and proximity. Pierce’s multivalent practice has for several years been conceived and executed under the label of ‘The Metropolitan Complex’ — so identifying an orientation towards situations of intricate connectivity, as well highlighting a first-principles condition of unavoidable anxiety (implied in the Freudian connotations of ‘complex’). Critical to the constitution of this ‘complex’ have been idiosyncratic articulations of archival research: Pierce draws from diverse institutional and informal sources in a manner that cites — and sites — disparate bits and pieces of the past in unorthodox configurations. There are, therefore, occasional acts of studious, estranging appropriation. Pierce seizes artefacts and images from within the strict order of archival filing systems — or liberates them from other current settings that define or limit their meanings — singling them out for renewed consideration within an alternative framework of interpretation. But such archival excerpts — and the tellingly ‘minor’ or neglected stories they can at times evoke — also serve as inspiration for singular re-stagings of historical situations. These are variously created approximations of past examples of artistic display or political dissent — glimpses of former efforts to forge elements of progressive culture, generally sought from within the histories of radical movements from the 1960s and 1970s — that have been ‘re-made’ in either sculptural or live form. In all cases, a spirit of playful, performative openness applies. A sense of agitated provisionality is returned to quoted images, objects and actions that we might at first imagine as representing fully concluded passages of history. Such provisionality is in part prompted by an emphasis on unlikely proximity — for Pierce typically places each selected or re-worked source into forced correspondence with traces of other, ostensibly unrelated narratives. Re-situated in space and time, the meaning and lasting import of these historical remnants is made more anxiously uncertain. Heterogeneous records and artfully imperfect re-creations of the radical past are brought together into new and often disconcerting arrangements in Pierce’s practice — so potentially radicalizing our own relation to these unsettled fragments in the present.

“It must be kept in mind that, for the collector, the world is present, and indeed ordered, in each of his objects. Ordered, however, according to a surprising and, for the profane understanding, incomprehensible connection.” [2]

The Meaning of Greatness, Pierce’s 2006 installation at Project Arts Centre in Dublin, featured, within its matrix of interconnecting contents, the following: (i) a re-constructed version of Eva Hesse’s Untitled (Rope Piece) from 1970, handmade by Pierce based on a description of the work in an ‘extended caption’ written by pioneering feminist art historian Lucy Lippard; (ii) archive photographs showing audiences at Belgrade’s Student Cultural Centre (SKC) in 1972, a space in which young artists from Yugoslavia sought to discuss emergent forms of art practice; (iii) documents relating to the ‘Kent State Massacre’: the horrific events of May 4 1970, when four unarmed students where shot dead by the US National Guard at Kent State University, Ohio. Bring together these loose threads of The Meaning of Greatness and what ‘meaning’ do we discover? What clue to artistic ‘greatness’ is uncovered? And what form of knowledge emerges from an attempt to link these lines of enquiry? It is helpful to know that one of Pierce’s college lecturers had been present on the day of the Kent State shootings; and it is important to note that Pierce’s research into the Belgrade artistic avant-garde of the 1970s involved visiting, and exhibiting in, former SKC spaces. She herself is part of the ‘complex’; she is intricately entangled in the coiling narratives. But as the careful re-weaving of Hesse’s ever-provisional ‘rope piece’ might suggest (Hesse continued to amend the work right up until her death), this seemingly uncertain predicament may alert us to a potentially positive way of thinking about history — and about the history of art. As Pierce has written: “Instead of a canon, imagine a more affectionate past. Formative, unfinished, not yet art, not in the realm of the documentable.” [3]

Paradoxically, perhaps, Sarah Pierce’s art ardently advocates coming together at the same time as it stubbornly resists synthesis. The research activities that inform her practice enable — and arise out of — forms of gathering. Archives, exhibitions, seminars, even (in the case of the current project for the Irish Film Institute and NCAD) student protest; each has been a resource, a point of reference, or an outcome of her work. And each points to a distinct potential for collating and communicating information, for sharing and determining knowledge. But the commitment to arranging occasions of carefully choreographed coming together — creating situations of dialogue in the present based on models from the past; staging systems of display that forge correspondences across history and geography; finding associative chains between culture and politics — is also, in her words, “a process of enduring and supporting undetermined, temporal relationships between ‘parts’, without conclusion.” [My italics]. This is an effort of finding “among the archived and the exhibited … utterances that don’t synthesise, that emerge unplanned and undeclared — utterances, that is, that rebel.” [4]

A notable remnant of a specific ‘rebellion’ features in ‘Towards a Newer Laocoön’, Pierce’s exhibition at NCAD Gallery. This is the borrowed ‘Laocoön’ sculpture itself: a damaged relic from a period of prolonged protest at the college in the late 1960s. For some years it has been a marginal presence on campus, an ignored leftover of a prior era of academic art. Occupying a hardly-noticed position close to the students’ union, its relevance to earlier convulsions of radical dissent in the college goes mostly unacknowledged. Now, re-located by Pierce to a dedicated site of artistic attention, this neglected antique object becomes part of a quite differently ‘rebellious’ scenario, one in which convulsions of meaning may begin to occur: an exhibition context in which appropriated elements seem to collide inappropriately. Commissioned by the Irish Film Institute to develop work in response to their vast archive of documentary films, Pierce has gathered a selection of footage which presents contrasting views of Ireland during the 1950s, 60s and 70s. And so, alongside the physical reminders of the NCAD protests (newspaper clippings from the collection of the National Irish Visual Arts Library, as well as damaged friezes accompany the bulky Laocoön), the gallery displays a multi-screened montage of curiously eye-opening documentary accounts of the changing Ireland. Pierce has drawn from many of the important ‘official’ representations of Ireland in these years — such as, for instance, the Gael Linn Irish language newsreels that aimed to provide up-to-date images of the transforming nation to cinema audiences across the Island — but by following the loosely threaded themes of ‘student culture’ and ‘foreignness’ in her research, she has accessed material that seems to resist easy incorporation into any standard, dominant narrative of national identity. Once again, an interest in discordant proximity and dramatic approximation heightens the effect of this accumulated appropriation. Playing non-stop concurrently with the other looping, sequenced newsreels is, for instance, the Northern Irish punk documentary Shell Shock Rock (1979) an intoxicatingly idealistic celebration of sub-cultural resistance. Its persistent, petulant soundtrack becomes an essential chorus within the wider installation. Added to all this, finally, is an intentionally convoluted question — The Question Would be the Answer to the Question, Are you happy? — the title of a new work by Pierce in which a group of current students have been filmed responding to the 1961 documentary film Chronique d’un été, an experimental sociological work in which non-professional actors perform scenes from everyday life and then meet to discuss the image of reality created by the film. Here, as elsewhere in Pierce’s work, a found source from the archives of radical culture becomes the basis of a contemporary discursive situation. A distinctive construct for ‘coming together’ is found in the archives, and the ensuing conversations make their anxious progress in relation to an unfamiliar set of cultural co-ordinates — opening up, perhaps, altogether unlikely and unpredictable historical pathways…